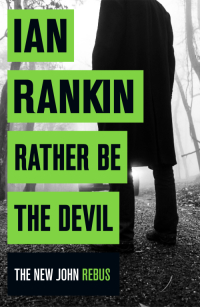 Ian has announced today that the title of his new novel will be Rather be the Devil.

John Rebus, now a couple of years into his retirement finds himself drawn into a cold case from the 1970s involving a female socialite, found dead in a bedroom in one of Edinburgh’s most luxurious hotels. It’s a crime over forty years old, but no one was ever found guilty.

Now, Rebus has his own reasons to investigate . . . but it is going to set him against some very dangerous people.

Visit Ian on Twitter to see his title announcement.

Rather be the Devil will be released in hardback, ebook and audio in November 2016.

PRE-ORDER YOUR COPY FROM WATERSTONES

ANNOUNCING THE A SONG FOR THE DARK TIMES EVENTS PROGRAMME

A SONG FOR THE DARK TIMES: Coming October 2020