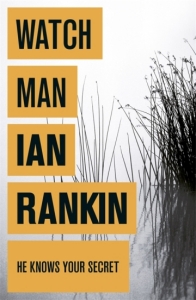 From the age of 12 until I was nearly 30, I kept a page-a-day diary, and reading through the years 1986-88 has allowed me to place Watchman in its historical context.

I got the idea for the book just before my wedding day, and took a bunch of research stuff on honeymoon. The entry for June 14th 1986 records: ‘I’m itching to start a new novel, either Rebus 2 or The Watcher.’ By July 14th (nine days after the wedding ceremony) I’d decided to concentrate on what was still called Watcher, and I was able to state in my diary that ‘the plot’s beginning to gel’. I then started writing the first draft a week later, and finished it on Sunday 2nd November. (Well, it’s a pretty short book…)

Watchman is a spy novel. My previous novel, Knots & Crosses, had involved a fairly cynical, worldly-wise cop, who’d been in the job the best part of 15 years. Miles Flint, my hero this time round, happens to be a fairly cynical, worldly-wise spy, who’s spent 20 years or so in that world. (I wish I could explain what attracts me to my jaded elders.) The difference between the two men is that while Rebus is a man of action, preferring confrontation to rumination, Miles starts out just the opposite: he’s a professional voyeur, and my job would be to change his role gradually from one of professional passivity to real and ruthless activity.

I think I was influenced largely by the anti-heroes of Le Carré and Graham Greene, and especially the Greene of The Human Factor. Greene’s best characters tend to be men who are forced to become involved in the world, to take a stand – something they’d much rather not do. The books I took on honeymoon included non-fiction works on British espionage (by Chapman Pincher and others) and a few on entomology. My wife had paid for me to adopt a dung beetle at London Zoo (it was the cheapest option), and I’d decided that Miles should be an expert in beetles, finding human equivalents for each kind among his colleagues.

Back to the diary. . . During that first draft, I had no job. We newlyweds were living in London, and my wife was supporting me while I tried, fresh out of the swaddling that was university, to become a writer. So it was that by January 13th 1987 I’d finished the second draft. Four days later I started work as ‘assistant’ at the National Folktale Centre in Tottenham (we needed the money). This gave me a lot of free time and access to a word processor, allowing me to work away at the third draft. By April of 1987, I was ensconced at Hawthornden Castle Writers’ Retreat, where fellow scribes included the poets George MacBeth and Ruth Fainlight and novelist Alasdair Gray. There, between hangovers, I put the final touches to the book’s final draft. (Another diary entry: ‘Since I found out that Jeffrey Archer writes six drafts of everything, I’ve begun to look more seriously at perfecting my own stories.’)

Watchman was announced in the catalogue for Bodley Head (who’d published Knots & Crosses) in November of that year, and finally appeared on June 9th 1988. My diary for that day reads: ‘Watchman published; world unmoved’. A few reviews appeared, some of them positive, and people approached me with a view to doing a spec film script, or maybe to write some episodes of The Bill. It was clear that writing a book a year was not going to keep the wolf from the door, so by this time I’d found a full-time job on a magazine called Hi-Fi Review. Watchman was failing to find a publisher in the USA, while my new editor at Bodley Head was hinting fairly heavily that I’d soon be needing to seek a new UK publisher, too.

I’d finished another novel, but no one was buying that either. Things seemed desperate indeed. I had a full-time job which entailed three hours of commuting a day; I was reviewing one or two books a week for Scotland on Sunday newspaper; and somewhere in the margins, I was trying to write. My wife meantime was attempting to move us to France, but she wouldn’t manage that for another 18 months or so, and before then, I’d have started work on the long-deferred ‘Rebus 2’…

I changed Watcher to Watchman after discovering Alan Moore’s graphic novel Watchmen. I’m guessing that Miles Flint took his surname from the character in the spoof 1960s spy films, In Like Flint and Our Man Flint. Re-reading the book recently, I was struck by how fast it moves, cutting quickly from one scene to another, its elliptical, breathless style marking it as a young man’s work, a story by someone in thrall to the possibilities of narrative. Strange, too, that it should be such a period piece: almost no one owns a mobile phone, and Miles doesn’t even own a computer. I was pleased to see so many in-jokes along the way. There’s an oblique reference to the events of Knots & Crosses, and Jim Stevens, the journalist from that book, reappears. There’s a pub called ‘The Tilting Room’ (actually a collection of stories by my friend Ron Butlin), and a gay club called ‘The Last Peacock’ (title of an Allan Massie novel). There’s also a character called the Organ Grinder, whom we’d see again in a later Rebus novel, The Black Book. And Miles’s son is called Jack. I’d forgotten that, though my own son, born four years after the publication of Watchman, has the same name. As to the book’s dedicatee. . . well, he went on to win a lot of money on Who Wants to be a Millionaire? Funny old world, innit?