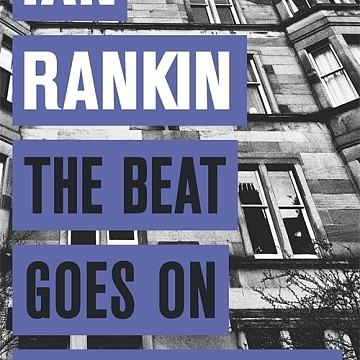 So that was my sabbatical year then…

Yes, I did hardly anything in 2014. Well, there was the US tour (for Saints of the Shadow Bible) in January, but then I had a nice long holiday in Barbados in February. In March, I wrote a few short stories and survived a stag trip to Krakow. April was very quiet, but in May I attended the Noir Festival in Zagreb – and survived making the best man’s speech at my mate’s wedding. Plus I wrote the introduction to a new edition of the James Bond short story collection For Your Eyes Only.

July meant ThrillerFest in New York, plus a holiday in Cromarty and dinner in Edinburgh with one of my idols, the inimitable Van Morrison (prior to publication of his Selected Lyrics – for which I contributed the foreword). August: I managed to catch a few shows at the Edinburgh Festival, and meet fellow authors at the Book Festival. There was another festival in September – Bloody Scotland in Stirling – where I captained the Scottish 5-a-side team to a 13-1 win over our English counterparts (a mere two days after the Independence Referendum). Along the way, the paperback of Saints of the Shadow Bible was released – and reached number 1 in the UK. I celebrated by picking grapes in France, for the first time since 1987. As Leonard Cohen put it so well: I ache in the places where I used to play…

October saw the launch of The Beat Goes On: The Complete Rebus Stories. Only they weren’t quite as complete as I’d hoped – just prior to publication, I found one I’d missed…! Then there was a German tour. Over there, Saints of the Shadow Bible is called Sleeping Dogs, which is actually a nice title – you’ll know why if you’ve read the book! November meant South Africa and Greece, and December…well, in December I’ll be planning next year’s book.

Does that come as news to you? Yes, I’ve signed up for two more novels. I hope to start writing the first one in January, so I’m already mulling over themes, plots, titles. I really enjoyed putting my feet up for a while, but I’m itching to get back to writing something substantial. So if you see me doing too much loitering on Twitter, tell me to get back to work!

And now for my favourite part of the year – my essential music, books and films of the past twelve months. My clever publishers tell me they can put together a Spotify playlist of my favourite tracks, so I’m including those too.

In no particular order, my albums of the year were: Rave Tapes (Mogwai), Croz (David Crosby), New Gods (Withered Hand), Everyday Robots (Damon Albarn), Seven Dials (Roddy Frame), Amphetamine Ballads (Amazing Snakeheads), New York in the 70s (Luke Haines), Weights and Pulleys (Broken Records), Futurology (Manic Street Preachers), The Ballads of Peckham Rye (Blue Rose Code), Popular Problems (Leonard Cohen), The Breaks (Martin Carr), Music for Insomniacs (Matt Berry) and It’s Nearly Tomorrow (Craig Armstrong). So the Spotify list is all from that selection, except Roddy Frame’s album doesn’t seem to be on Spotify, and Matt Berry’s album consists of only two long tracks so I’m leaving it off the playlist – but do check it out!

Actually, towards the end of the year I’ll probably try to get my list down to a top ten and put it in order of preference on Twitter – so watch out for that.

As for films of the year, I really enjoyed Locke, In Order of Disappearance, and Muppets Most Wanted, but the film I liked best was Grand Budapest Hotel – I saw it twice at the cinema and will no doubt end up watching it on DVD too. It’s clever, charming, beautifully acted and paced.

Books of the year: Paul Thomas’s Death on Demand (bruising police procedural set in New Zealand), Viv Albertine’s Clothes Music Boys (punk scene and after from a veteran who bears the scars), Tom Rob Smith’s The Farm (edge-of-seat psychological thriller), Linda Grant’s Upstairs at the Party (tragedy at a 1970s student party comes back to haunt the survivors), David Nicholls’s Us (a crumbling marriage, painstakingly and humorously observed), Karin Fossum’s I Can See In The Dark (creepy careworker is investigated by police – but for the wrong crime), and Martin Amis’s The Zone of Interest (harrowing satire on Nazi death camps).

No clear favourite – it’s been a good year for books…

So that’s about it from me. Except to say I have one final organised event this year – at Blackwell’s in Edinburgh on the evening of 11th December. So if you need any last-minute stocking-fillers, I’ll be signing (and I’m sure Blackwell’s can post books elsewhere in the UK if you ask them nicely). Have a great Christmas and New Year, go find that Spotify playlist, and I’ll see you in 2015!